Why blend in when you can stand out

I have just seen the catwalk for Chanel’s Pre Autumn Winter 16/17 show and wanted to do a quick post about it. It’s been all over my Facebook and Instagram so it’s a hard one to ignore.

If you haven’t seen it,the show was set in Rome’s iconic Cinecittà film studio. Giving homage to the setting of the show, Karl Lagerfeld played his latest short movie, Once And Forever, for guests before it all began.

The looks were quite gothic glam while keeping elements of the classic Chanel style. A lot of black patent and lace were donning the catwalk in forms of pencil skirts, short jackets and light gowns. The usual Chanel tweed two piece suits were dotted among the rockier looks of the night. Details such as ruffle and appliqués adorned the garments. The colour tones were muted with pops of rust orange and light pink.

The eyes were the standout feature of the face with the heavy eyeliner and smokey eye while the lips and face were very neutral. The hair was very teased and thrown into a beehive. A look that any of us could achieve, the ‘this is my make up from last night‘ kinda style I would say.

Personally I loved it, I’m all for that gothy look, and since it’s quite sexy it’s not such a scary look to try pull off yourself. Here are some of my favourite looks from the catwalk. 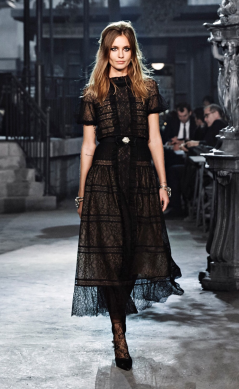 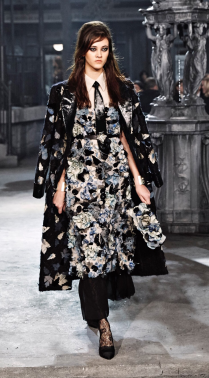